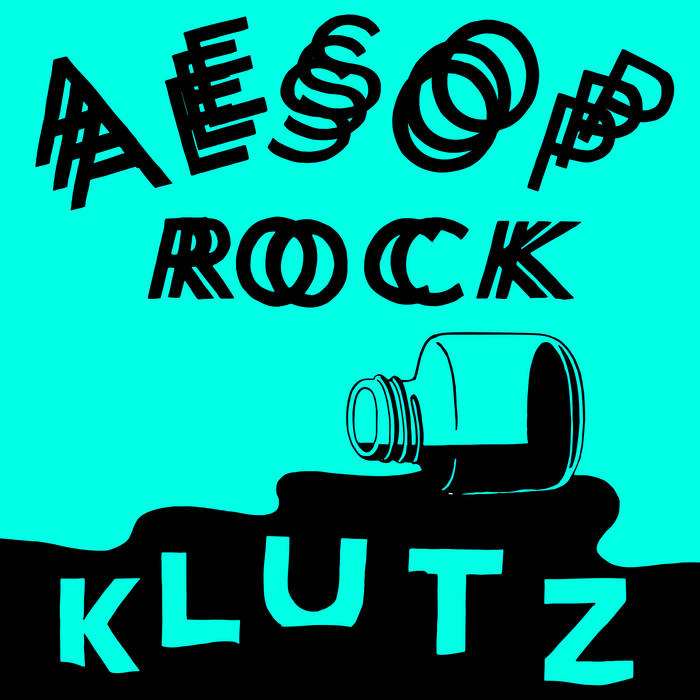 Jam Taster Beverage Review: A harsh, robust, and earthy flavor; off-putting to some newcomers but a welcome delight for those who have acquired a taste for Aes.

Melancholiclia This track puts a beat in your step.

Viviana Love me some Aesop!!!
more...

A message from Aesop Rock –
"Here is something new - KLUTZ.
Occasionally song structure eludes me and it feels good. No problem-solving or pesky hit chorus, just rambling. Klutz is such a moment. I had started a couple things to this beat before sacrificing it to the gods of not-shutting-up, but this seemed a fitting fate. I hope you enjoy it.
My longtime video collaborator, Rob Shaw, helped visualize my long-windedness, and I’m excited to have Steve Espo Powers gracing the artwork for the release.
Lyrics below. Thank you."

You can also pre-order the limited 7” vinyl version which features both the song and the instrumental, as well as art/design by Stephen "ESPO" Powers, only available from Fifth Element. Additionally, bundle the limited Klutz t-shirt with your 7", only available with pre-orders. Get yours now: bit.ly/KlutzFE

Can’t motherfuck a motherfucker, from the underfunded Klutz who never undercut the butcher, The pick-a-booger-at-your-wake is bumping “I’m your pusher” also at your wake, Juvenile Intruders at the gate, brooding over waking history that bubbles from the blinking 12s of VCRs and Microwaves, like time machines for shrinking elders, rifling through their recipe, carrots, onions, celery, what unique amalgam of piss and repugnant energy spun him out of the 70s, to b-line for dessert? Fire-eater trying to keep it on the green side of the dirt, this is tea-time with the worst, geriatrics on decline of berserk, back in my day we were 3x more alert, now I go through my old clothing trying to find nostalgic threads to sell, walk away feeling like I should have never dressed myself, sincerely I was never on the cutting edge, my hand was on the hilt, you’re free to build with the other end, shriek into the vacuum If in spite of your accomplishments, you wake up feeling empty like Houdini’s grave probably is, volley with the quintessential digital-ager, Im offended by everything, my opinions comes in manger, oh boy, depreciating since they drove me off the lot, still into ghost stories and pot and the classic coconut bra, procedural crime drama shows with holes in the plot, and reminding clones there’s more to coping than a nose full of snot, ah, old pros throw 'bows to the 808, you couldn't throw a rope over a baby gate, bishop to queen 4 in damn Daniels under ram skulls, plan for cloudy with a chance of anvils, fever dreams of padded cells and jagged pills in frozen pipes, socialites from pageant hell with plastic smells and robot eyes, I’m hoping you all grow into the sentience you assume, as your moment of self-reflection is a moment for me too, look, with the steel chair, sure to serve the veal rare, brush up your evasion and basic tactical field care, I was on that constant futile rage before the internet, I been ignored for longer than you’ve been interested, the posse promise you nobody feels threatened by a scarecrow covered in crows who feel welcomed, that’s like hellions thinking hell is just ok but needs some polish, It helps to know intimidation’s all about the optics, come duck a bounty, it's a hoot, Suffolk County it's a zoo, puppy chow and bitches brew, it's not exactly chicken soup, it’s heavy-lifters lifting, it’s ginseng on his whistling, it’s we don’t find the flippancy convincing, 2 for flinching, older yeller, never knew a no-kill shelter in his doggie days, now I draw my neighbors over Kouign-amanns and coffee stains, a walled and whirling urchin, more observant than audacious, I document the great unwashed and curse in Lithuanian, for a gallery of grifters channeling Sid’s action figures grafted with his little sister’s after markers glue and scissors, it’s trippy, the truth and fiction moving to a center, maybe it’s weirder they’ve never been photographed together, sometimes the stomach disappears from under a retreating lens, and patterns of a need to please abusive folk reveal themselves, I’m peeling back the layers, I’m sneaking past the lasers, I’m a lover, I’m a fighter, I’m a seed to blackened acres, the dogs I think are following me home are out to kill me, your music makes a motherfucker wanna move to Elm Street, rejection of the spirit by the body at your service, if you mess-up every friendship come get swept up in the current, here, wheels fall off of cars when they see him, seas part, green trees march out of Eden, I'm known to eat the heart and keep the archery uneven, are you starting to be part of the kinesis?

released May 18, 2018
Written and produced by Aesop Rock