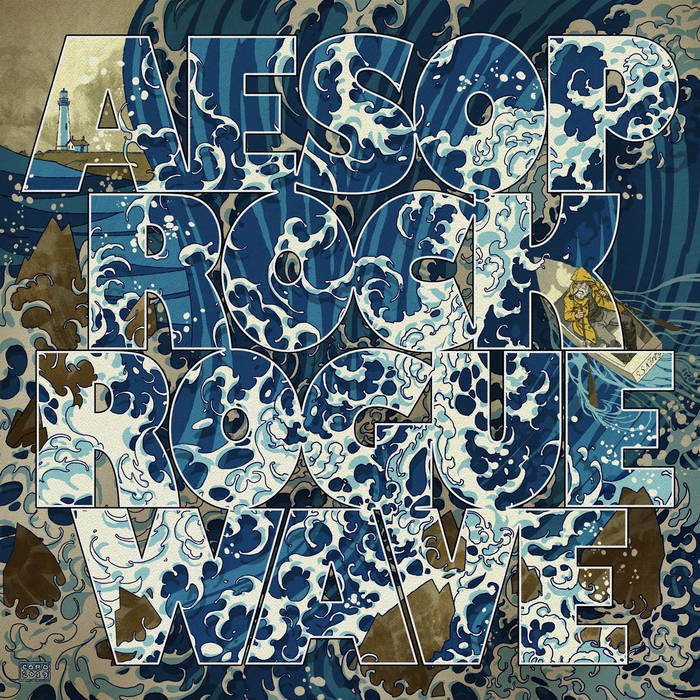 Recently, a good friend of Aesop Rock's, Kurt Hayashi unexpectedly passed away. Kurt was a well-known skate videographer and he also shot the music video for Aesop's "Hot Dogs". A portion of the proceeds from all "Rogue Wave" sales will be donated to the Hayashi family in Kurt's honor.

"Rogue Wave feels like a long journal entry to me - perhaps in the vein of Hot Dogs and Klutz. I really enjoy skipping the hook entirely. It doesn’t always work - but when it does it just feels right. To me, this song is a small boat lost at sea, rowing for hours, days, losing all track of time and direction - 360 degrees of nothing but ocean. My old friend Coro captured the concept perfectly in the cover image. We’ve included a small print of the image with no text inside each 7” for your viewing pleasure. You should probably hang it in your hallway. Additionally, we are offering a long sleeve tee in raincoat yellow, also from the pen of Coro. I’ve been a little timid over the years to showcase my own drawings, probably because I’ve been out of practice, and also because people know me for my music. It’s always a little dicey promoting a medium you’re not really known for, and I feel the same nerves I felt when I was young, playing people demos for the first time. That said - I’ve been drawing a fair amount in recent years, and finally decided to collect a lot of the images together for a music video. My long time collaborator and friend Rob Shaw pieced them together in a way that feels similar to the song - an uninterrupted stream of information. Please enjoy this song, video, and garment." - All love, A.R.

A little bread, a little circus, it serve as a diversion for devils and death merchants, I was curled up underneath the swirling threat of reds and purples, lumberjack flannel, strapping saddles over servals, paddling in circles with 10,000 maniacs in yankee caps, who get to know the neighbors every time they tip the ladle back, rag tag cats and canines who catch phat tags on the fabric of space time, all work no play, dull boys rotate, Old Boy, Ghostface, Tolstoy, Coltrane, throws up coffin nails, off the rails, born bathed in a tornado of claws and tails, got skulls on his sails, cobras on the pleather, salt and pepper soldiers barely holding it together, but supposedly awoke and down to mobilize whenever, you’re pretty much a Gomer Pyle to pester, remember, I’m Pop-O-Matic trouble, I will commander the goulash under hockey hair, zoom off on a blue ox through the blogosphere with poppies for your mama bear, carrots for the vitamix, kibble for the puppy, something bloody for the firebit, never mind the appetizer writhing in the spider web, stare into it long enough you biters just might find yourselves, tea with the dark side, Slimer on speed dial, sleep on a couch or a street or a leaf pile, our kind can not be redeemed, I’m a cancer on the glamor, I can’t with the “Me Me Me”, no anesthesia, surgeon with the signal jammer scrambling the feed, distributing the panacea free, all day, there is no amount of Our Fathers that could remedy the black dog breathing down his collar, mi casa like I’m Oscar, hot and popping out a flipped lid, eyepatch, Prince wig, disappearing grid blip, stiff lip, sure to shit talk a centurion, tsk tsk, I don’t really wiggle with invertebrates, purp in the thurible, off sides, toss thine merch in the urinal, it’s nothing personal, dirtbag don, don’t provoke him to act up, I’m golden doing donuts in the Totoro cat bus, everything I touch turn to black sludge, bugs in the bag lunch, punch through a mack truck, hunchback, get y’all acquainted with the contagion, nobody safe, say hello to well beyond containment, I came for every cell between the belfry and the basement, you maybe wanna telephone your favorites, we take it where the warlocks lock horns, soda pop, popcorn, top notch gore set to Bach over fog horns, snotty nose, clogged pores, fork in his heart, back away or catch a halo made of orbiting stars, yea, transform in the dark, got a dog nose sniffing out the source of the snark, got a cat’s ears twitching every snap of a twig, triangulate your position, a simple rabbit to skin, I been an echo in the dark who demo applied science at the parlay, barf rainbows and cry diamonds, ok, ready Freddy, headlong into creeping death, respawn where you least expect, I could pick a pin and tumbler right in front of the guard, out the front with another Picasso under his arm, hit the city limit still exhibiting his inner Caulfield, baby, I’m H.E. double hockey sticks on wheels, new dawn, show ‘em how the voodoo doll feels, plus launch fireballs from the palm heels, on an otherwise slow day, this is how I row into the rogue wave, yo...